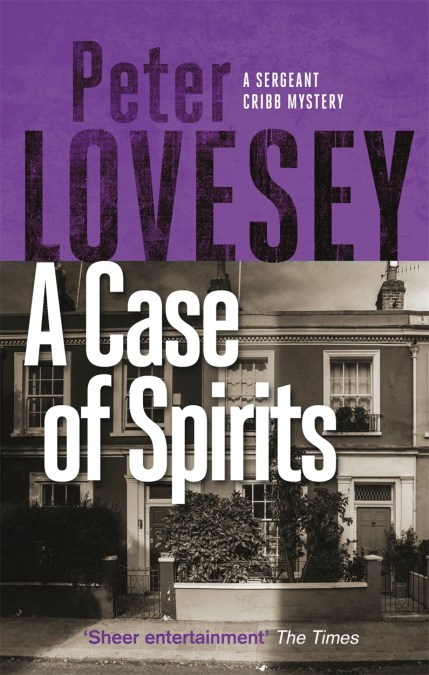 A Case of Spirits

The spiritualist movement has captivated a segment of Victorian London: manifestations, the occult, and ‘sensitives’ are in vogue. Unfortunately, those ready to believe are vunerable to fraud.

When séance sites become targets for theft, Sergeant Cribb and Constable Thackeray are on the case. But then someone murders the medium, and the two find themselves rubbing shoulders with some rather eccentric suspects. 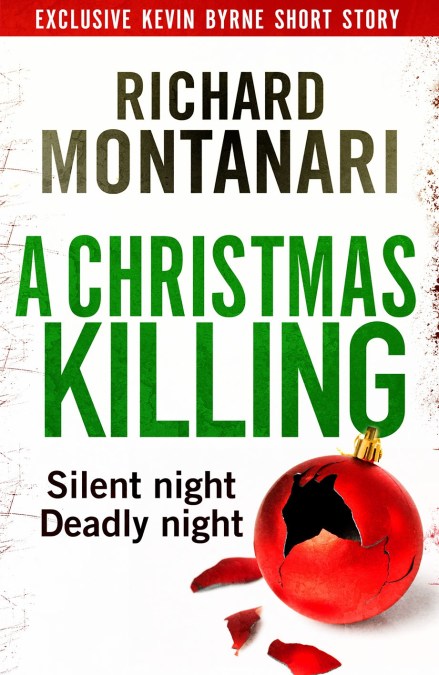 Christmas Eve, 1988. Partnered with streetwise veteran Frankie Sheehan, Byrne is called out on a freezing night to investigate the brutal assault of a young woman in a crime-ridden neighbourhood, The Devil’s Pocket.

There, with the rest of the city celebrating, relentless rookie Byrne must step out from his partner’s shadow to outwit a terrifying predator on the same vicious city streets he will later revisit with his future partner, Jessica Balzano. 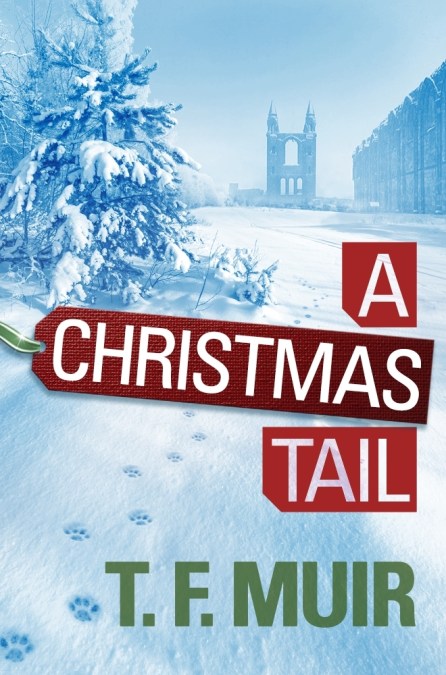 by T.F. Muir
When Isabelle McLaren is given the devastating news that her ten-year old son, Thomas, has only months to live, she decides to take him to St Andrews to see Hamish McHamish, the town’s famous cat who Thomas believes can cure him, if only he gets to stroke him.

But Hamish is missing, and when Thomas’ health takes a sudden turn for the worse, Isabelle asks DCI Andy Gilchrist for help – find Hamish, and give her son his final wish. But in the season of goodwill to all men, will it take a cat to prove that miracles can still happen?

‘Rebus did it for Edinburgh. Laidlaw did it for Glasgow. Gilchrist might just be the bloke to put St Andrews on the crime fiction map.’ Daily Record

‘A truly gripping read, with all the makings of a classic series.’ Mick Herron

‘Gripping and grisly, with plenty of twists and turns that race along with black humour.’ Craig Robertson

‘Gilchrist is intriguing, bleak and vulnerable… if I were living in St Andrews I’d sleep with the lights on.’ Anna Smith 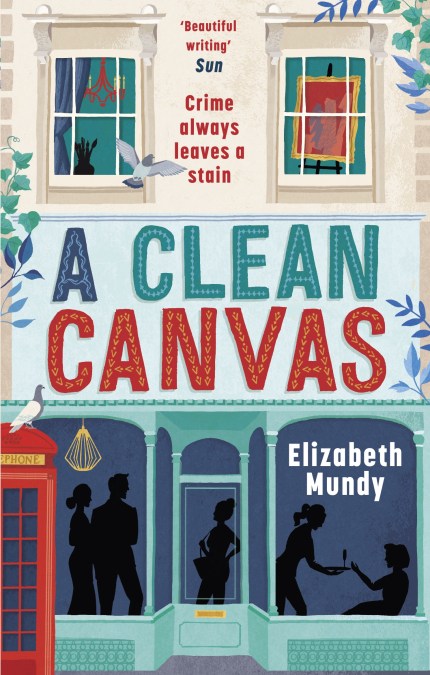 Lena Szarka, a Hungarian cleaner, dusts off her detective skills when a masterpiece is stolen from a gallery she cleans with her cousin Sarika. But when Sarika goes missing too, accusations start to fly.

Convinced her cousin is innocent, Lena sweeps her way through the secrets of the London art scene. With the evidence mounting against Sarika and the police on her trail, Lena needs to track down the missing painting if she is to clear her cousin.

Embroiling herself in the sketchy world of thwarted talents, unpaid debts and elegant fraudsters, Lena finds that there’s more to this gallery than meets the eye.

What did other readers have to say about A Clean Canvas?

‘Witty and warm but with an unsentimental core of steel in its chronicling of London’s guest-workers, this looks set to become a highly popular series’ Morning Star

‘I loved In Strangers’ Houses – poignant, funny and races effortlessly along. Lena is a wonderfully unusual heroine and I can’t wait for her next adventure’ Elodie Harper

‘A deliciously light and amusing souffle of a book, the second in a series that is bound to run and run’ Irish Independent 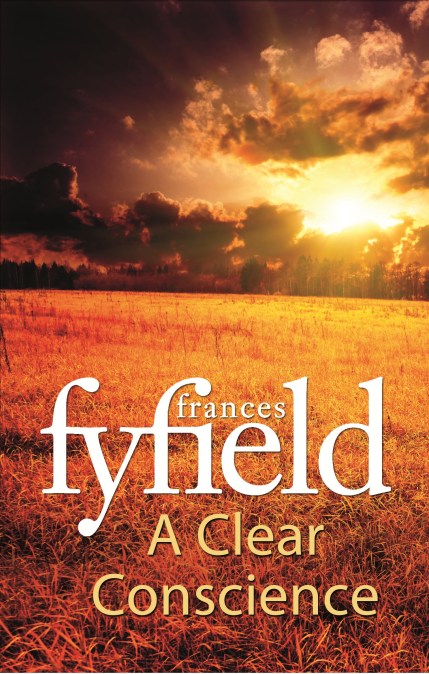 by Frances Fyfield
Helen West’s personal life is in need of repair, and she decides the first move is to tidy up her home, helped by her cleaning lady, Cath, who is trapped in a miserable marriage. Working by day with domestic violence cases, Helen finds it too easy to turn a blind eye to Cath’s unhappiness, but then her personal and professional lives collide as she witnesses the destructive forces of love and guilt, and finds herself applying her own version of justice. 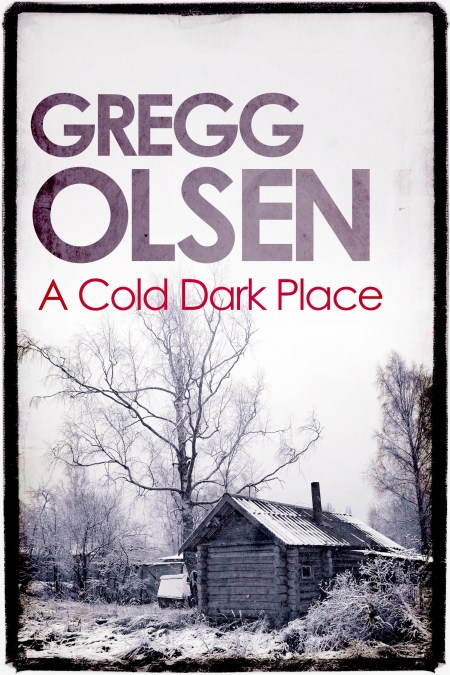 by Gregg Olsen
The Seeds Of Evil…

In a secluded farm house in the Pacific Northwest, a family has been slaughtered–and a teenage son has disappeared. Single mother and cop, Emily Kenyon spearheads a dark hunt for a killer. But Emily’s teenage daughter Jenna is one step ahead of her…

Jenna knows the boy suspected of murdering his family and wants to help him–perhaps too much. Then within days of the first murder, another family is butchered, this time in Iowa. And on the heels of this brutal slaying, another follows in Salt Lake City. Eerie similarities link the crime scenes. But an even darker connection threatens to claim even more victims…

As Emily fits the puzzle pieces together, she realizes the danger surrounding her daughter is worse than she’d imagined. Now in a desperate race to save Jenna, Emily must match wits with the most cunning, diabolical killer she’s faced yet in her career–a killer who’s just placed her and her daughter at the top of his list… 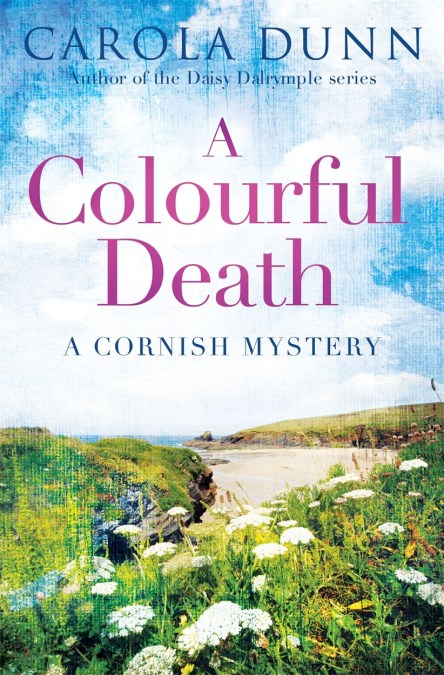 by Carola Dunn
After a lifetime of travel and experiences, widow Eleanor Trewynn is more than happy to retire to the sleepy village of Port Mabyn in Cornwall – but unfortunately, excitement seems to follow her around!

Her friend and neighbour, artist Nick Gresham, discovers several of his paintings in his shop have been slashed and destroyed. The finger of suspicion rests on rival local artist Geoffrey Monmouth but when Nick and Eleanor go to have it out with him, they find Monmouth’s stabbed body in his studio – and Nick is immediately flagged up as most likely suspect.

DI Scumble and DS Megan Pencarrow, Eleanor’s niece, have been assigned to investigate the murder but Eleanor isn’t leaving anything to chance – but once she starts investigating she learns Nick is far from being the only candidate with a compelling motive for murder… 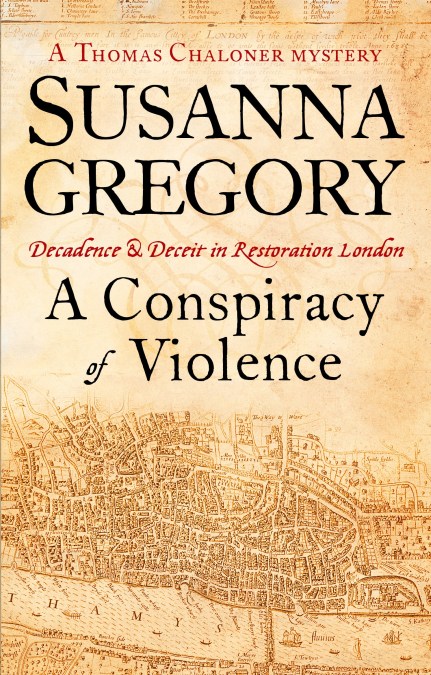 A Conspiracy Of Violence

The first adventure in the Thomas Chaloner series.

The dour days of Cromwell are over.

Charles II is well established at White Hall Palace, his mistress at hand in rooms over the Holbein bridge, the heads of some of the regicides on public display. London seethes with new energy, freed from the strictures of the Protectorate, but many of its inhabitants have lost their livelihoods. One is Thomas Chaloner, a reluctant spy for the feared Secretary of State, John Thurloe, and now returned from Holland in desperate need of employment. His erstwhile boss, knowing he has many enemies at court, recommends Thomas to Lord Clarendon, but in return demands that Thomas keep him informed of any plot against him. But what Thomas discovers is that Thurloe had sent another ex-employee to White Hall and he is dead, supposedly murdered by footpads near the Thames. Chaloner volunteers to investigate his killing: instead he is dispatched to the Tower to unearth the gold buried by the last Governor. He discovers not treasure, but evidence that greed and self-interest are uppermost in men’s minds whoever is in power, and that his life has no value to either side. 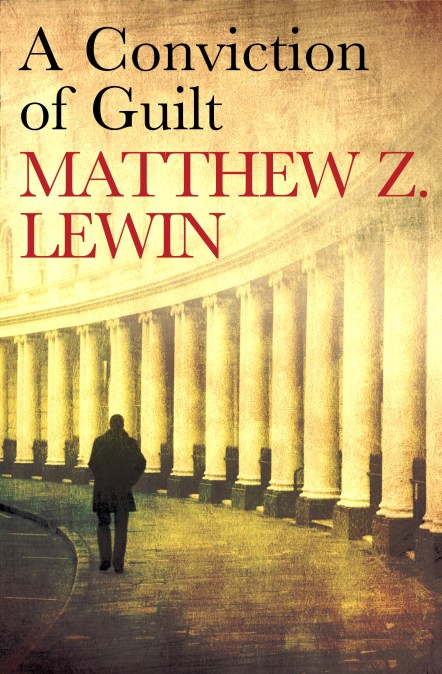 A Conviction of Guilt

by Matthew Z. Lewin
The unexplained murder of American PI Murdoch Finnegan at his flat in Belsize Park poses a complex mystery for Horatio T. Parker, chief crime reporter (and secret owner) of the Hampstead Explorer. Not only is the murder apparently motiveless, but it also emerges that in his will Finnegan has left Parker – already a multi-millionaire – a curious house in Golders Green.

Parker, slightly distracted by the gorgeous Samantha McDuff (a karate expert with an excruciating handshake), begins a dangerous investigation which leads him back to the horrifying abduction and murder of a little girl in 1970s London.

Parker’s investigative methods are amusingly eccentric, and the story is enlivened by a Jewish policeman-cum-Talmudic scholar and Parker’s chauffeur, a cheeky Cockney ex-cabby. But there is no humour in the story’s climax, which plumbs the dark depths of fury and retribution. 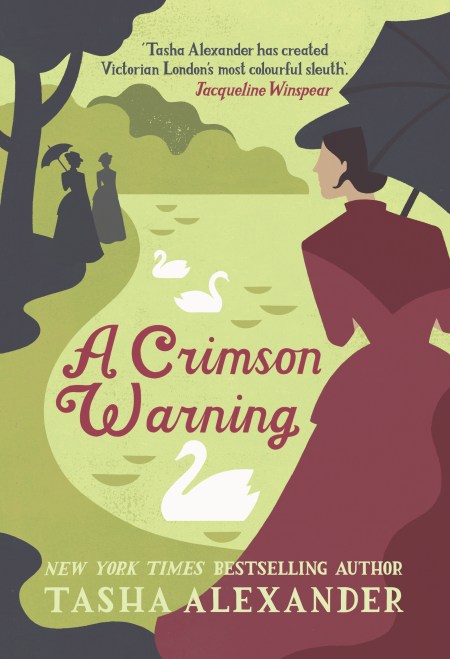 Newly returned to her Mayfair home, Lady Emily Hargreaves is looking forward to enjoying the ‘delights’ of the Season – waltzing with her dashing husband, reading The Aeneid, and joining the Women’s Liberal Federation in the early stages of its campaign to win votes for women. But an audacious vandal is disturbing the peace in the capital city, splashing red paint on the neat edifices of the homes of London’ s elite. This act, impossible to hide, presages the revelation of scandalous secrets, driving the victims into disgrace, despair, and even death.

Soon, all of London Society is living in fear of being the next target and it’s down to Lady Emily and her husband Colin to uncover the identity and reveal the motives of the twisted mind behind all this before another innocent life is lost.

‘A Crimson Warning is the sixth book in the Lady Emily Mystery series and hands down the best thus far‘ Criminalelement.com

‘With Emily embodying the feminist ideals and sleuthing instincts of Amelia Peabody, this historical mystery should appeal to fans of Elizabeth Peters‘ Booklist

‘If you like a little mystery mixed with your historical fiction, Tasha Alexander will not disappoint‘ Bookreporter 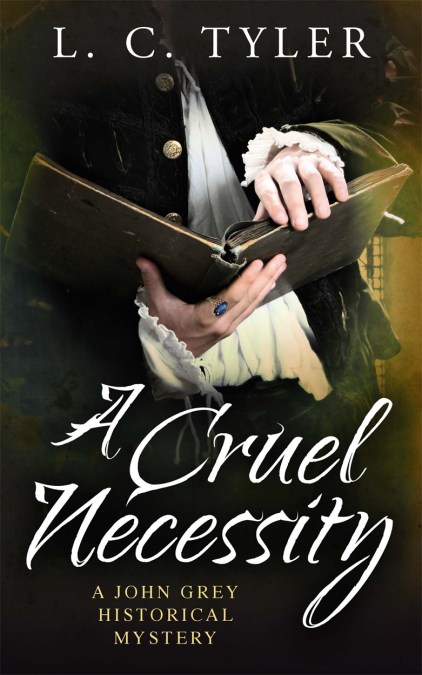 The theatres are padlocked.
Christmas has been cancelled.
It is 1657 and the unloved English Republic is eight years old. Though Cromwell’s joyless grip on power appears immovable, many still look to Charles Stuart’s dissolute and threadbare court-in-exile, and some are prepared to risk their lives plotting a restoration.

For the officers of the Republic, constant vigilance is needed. So, when the bloody corpse of a Royalist spy is discovered on the dung heap of a small Essex village, why is the local magistrate so reluctant to investigate? John Grey, a young lawyer with no clients, finds himself alone in believing that the murdered man deserves justice. Grey is drawn into a vortex of plot and counter-plot and into the all-encompassing web of intrigue spun by Cromwell’s own spy-master, John Thurloe.

So when nothing is what is seems, can Grey trust anyone?

‘Tyler juggles his characters, story wit and clever one liners with perfect balance’ – The Times

‘A cracking pace, lively dialogue, wickedly witty one-liners salted with sophistication . . . Why would we not want more of John Grey?’ – The Bookbag 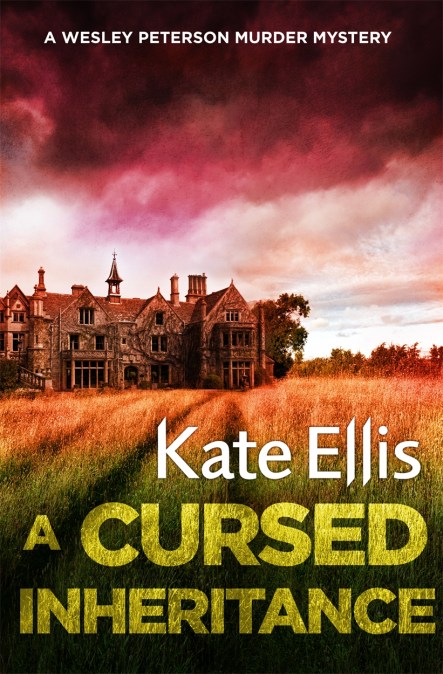 by Kate Ellis
The brutal massacre of the Harford family at Potwoolstan Hall in Devon in 1985 shocked the country and passed into local folklore. And when a journalist researching the case is murdered twenty years later, the horror is reawakened.

Sixteenth century Potwoolstan Hall, now a New Age healing centre, is reputed to be cursed because of the crimes of its builder, and it seems that inheritance of evil lives on as DI Wesley Peterson is faced with his most disturbing case yet. As more people die violently, Wesley needs to discover why a young woman has transformed a dolls house into a miniature reconstruction of the massacre scene. And could the solution to his case lie across the Atlantic Ocean, in the ruined remains of an early English settlement in Virginia USA?

When the truth is finally revealed, it turns out to be as horrifying as it is dangerous…
Previous Page Next Page