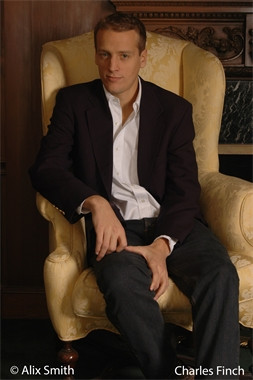 BULLET POINTS is a series of tips for aspiring crime writers

direct from published Crime Vault authors. There will always be five of them and they will always be short and snappy, so if you find yourself staring in frustration at the blank page in front of you, we hope they provide the inspiration for you to start writing…

Here, in the first of the series, we ask US mystery novelist Charles Finch to share his writerly secrets.

1. First off, Charles shares some inspiration:

A quote that gives me a lot of strength to continue writing is from George Orwell: ‘Any life when viewed from the inside is simply a series of defeats.’ No matter how bad your work seems to you, Orwell’s work seemed just as bad to him most afternoons.  That’s a genuine comfort.

For a less dour quote, I like this, from Emerson: ‘If the single man plant himself indomitably on his instincts, and there abide, the huge world will come round to him.’  Fidelity to your own vision is a powerful thing.

Unfortunately the advice for writers out there is almost uniformly useless, and I don’t want to add to it.  All you can really do is write.  The only cure for anything, bad writing, writer’s block, failure, is to write more.

3. Charles on how to create a strong series character:

I think there are two approaches here: one is to make your lead character outlandish and fascinating (like Ozkar Mazerath in The Tin Drum for instance) the other to make your lead character quiet, observant, and flexible, and allow the world around him to be outlandish and fascinating (Nick Carraway in The Great Gatsby is a good example).  I chose the latter route in my Charles Lenox novels, and I think it allows for better durability over a long series.  Arthur Conan Doyle chose both options: an utterly normal character, Dr. Watson, and an utterly unique one, Sherlock Holmes.  But he was a genius.

Personally I like to choose a setting, and then let the setting determine the plot.  For instance in A Burial at Sea, I knew I wanted to write about a British naval ship, and as I started to research the navy, and where the ships usually went, the story came to me.  In A Death in the Small Hours I knew I wanted to write about a country house, and that gave me the idea of writing a murder story set in the village nearby.  I don’t know how other people do it but I start with the setting.  It leads me to the plot.

5. Charles’ top tips for maintaining suspense within a plot:

This is tough.  Lee Child has a simple rule: the reader has to want to know something on every page of the book, whether the answer is a page away (‘Who is that woman?’) or two hundred pages away (‘Who killed the victim?’)  I think that’s smart – a series of irritating little itches – and I would add that it’s good to leave behind your main plot and circle back to it, so that the reader has something to wait for.  Then when you’ve circled back, hopefully, they’re waiting to see how that secondary plot will turn out…

Find out more about Charles Finch and his Victorian mystery series.